The Mesa Independent brings readers everything they need to know about living and playing in Mesa.

The city of Mesa dates back more than 2,000 years when the Hohokam people arrived to the area and built sophisticated water canals. Turning what was then dry Sonoran Desert into a viable agricultural oasis, the canals marked the first developments in the area that is now known as Mesa, Arizona, according to the city’s website.

Enduring several explorations and settlements throughout the 1500s and 1600s that used the Hohokam’s early canals, by 1878 the city had a registered town center — the square-mile block of Country Club to Mesa drives to Broadway Road and University Drive.

The town was then named Mesa City and just two years later, shelters and a schoolhouse were erected and crops were planted. By 1883, about 300 residents made up Mesa City and elected the city’s first mayor.

By 1941, two air bases had been built in East Mesa to support World War II training. Falcon Field — now Falcon Field Airport at Greenfield and McDowell roads; and Williams Air Force Base — now Phoenix-Mesa Gateway Airport at Power and Ray roads, are major economic and employment centers for the city.

The city’s industries of opportunity are health care, education, aerospace/aviation/defense and tourism/technology. Mesa is home to about 508,000 people, covering 138 square miles in the East Valley.

The Mesa Independent, which started in 2021, is mailed for free monthly to ZIP codes 85209 and 85212, serving Eastmark and Sunland Springs Village. Earlier versions of the newspaper — including when it was known as the East Mesa Independent — were distributed for 58 years, with the last weekly issue on April 27, 2016.

The digital daily newspaper at https://www.yourvalley.net/mesa-independent/ covers the entire city of Mesa, delivering readers stories on issues affecting their quality of life and promoting involvement in their local neighborhoods through activism, entertainment and business news.

We'd love to hear from you.

And it's easy to connect with us at Independent Newsmedia.

Customer Service
To speak to one of our customer service specialists, please call us at 623-972-6101.

Classifieds
For classified advertising in print or online: Email iniclassads@newszap.com.

Memorials & Obituaries
For all questions about printed and online obituaries: Email azobits@newszap.com.

Advertise with Us
Local businesses interested in getting your message to our readers: Email azads@newszap.com.

Legals
For legal advertising in the Daily Independent: Email legals@newszap.com.

To see our archives 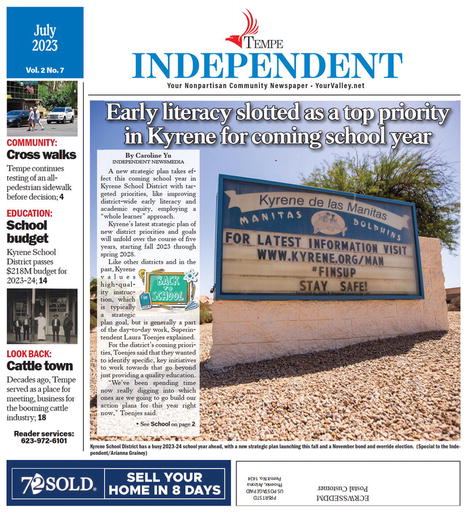 Tempe has filed a request for the Arizona Supreme Court to review a recent appeals court decision that would allow the fate of a $1.8 billion lakeside development to go before voters. South Pier, …