Mikaela Shiffrin holds a big lead in the first run of a giant slalom and could quickly add to her record total of 83 World Cup wins on the same course where she set the women’s mark a day earlier. … 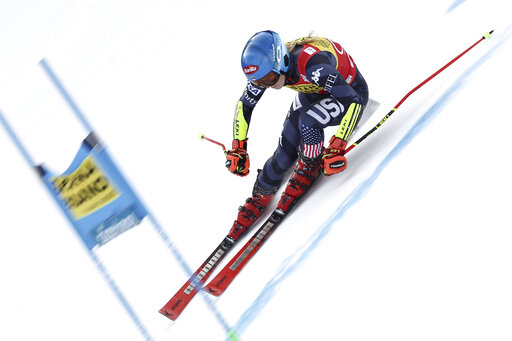 SAN VIGILIO DI MAREBBE, Italy (AP) — Mikaela Shiffrin held a big lead in the first run of Wednesday's giant slalom and could quickly add to her record total of 83 World Cup wins on the same course where she set the women’s mark a day earlier.

Shiffrin was 0.51 seconds ahead of Olympic champion Sara Hector and 0.65 ahead of former World Cup giant slalom champion Marta Bassino.

Only two other skiers, Ragnhild Mowinckel and Federica Brignone, were within a second of Shiffrin's time at the Kronplatz resort in San Vigilio.

Shiffrin also led the first run on Tuesday, when she moved ahead of the previous record of 82 wins held by former American teammate Lindsey Vonn.

Shiffrin had a late night after her record-breaking day.

“But it was a really nice evening,” she said. “It was so nice to see messages from people and so much support and so much excitement about the race. I was definitely looking a lot at all of that and then trying to go to bed and have a good night’s sleep. And I was awake at midnight. I was awake at 3. Then I was awake at 5. I was hungry all night. I was like, ‘Oh my gosh, I’m a mess.’”

Still, Shiffrin managed to pull herself together in order to bring out her best skiing again.

“It’s a beautiful hill again today. The surface is amazing and it was a nice course setting, a lot of active skiing, dynamic skiing,” she said. “So I felt very good with the first run and I am looking forward to one more run on the hill.”

The upper portion of the steep Erta course was foggy but visibility improved as skiers made their way down.

If Shiffrin wins Wednesday's race and two slaloms in Spindleruv Mlyn, Czech Republic, this weekend, she could match Stenmark on Sunday.

UFC to expand into Mexico with new training facility