Rail strike to be averted: Biden to sign bill

President Joe Biden is signing a bill Friday to avert a freight rail strike that he said could have plunged the U.S. into recession.

The White House said that Biden would sign a measure passed …

Rail strike to be averted: Biden to sign bill 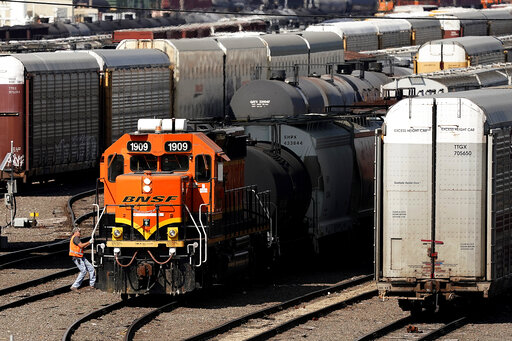 FILE - A worker boards a locomotive at a BNSF rail yard on Sept. 14, 2022, in Kansas City, Kan. American consumers and nearly every industry will be affected if freight trains grind to a halt in December. One of the biggest rail unions rejected its deal Monday, Nov. 21, 2022, joining three others that have failed to approve contracts over concerns about demanding schedules and the lack of paid sick time. That raises the risk of a strike, which could start as soon as Dec. 5 and cost the economy up to $2 billion a day. (AP Photo/Charlie Riedel, File)
Posted Friday, December 2, 2022 7:36 am
By JOSH BOAK

President Joe Biden is signing a bill Friday to avert a freight rail strike that he said could have plunged the U.S. into recession.

Members in four of the 12 unions involved rejected the proposed contract, creating the risk of a strike beginning Dec. 9 that the government has likely staved off with the bill signing. A freight rail strike also would have a big potential impact on passenger rail, with Amtrak and many commuter railroads relying on tracks owned by the freight railroads.

The president has said that a strike would have sunk the U.S. economy, causing roughly 750,000 job losses as the work stoppage ruptured supply chains for basic goods, food and the chemicals needed to ensure clean drinking water.

Rising prices already have many Americans afraid of a coming downturn, but the U.S. job market has been steady. The government reported Friday that employers added 263,000 jobs in November as the unemployment rate held at 3.7%.

Though Biden is a staunch union ally, he said the rail order was necessary to prevent a strike.

The Biden administration helped broker deals between the railroads and union leaders in September, but four of the unions rejected the deals. Eight others approved five-year deals and all 12 are getting back pay for their workers for the 24% raises that are retroactive to 2020.

But the absence of a meaningful increase in paid sick leave and other quality-of-life issues was a key concern for many union members whose votes were required for the settlement. The railroads say the unions have agreed in negotiations over the decades to forgo paid sick time in favor of higher wages and strong short-term disability benefits. Union members say railroads could afford the paid leave given their profit margins.

House Democrats narrowly adopted a measure to add seven days of paid sick leave to the tentative agreement, but that change fell eight votes shy of the 60-vote threshold needed for Senate passage.

AMC to charge more for good seats in movie theaters

Legal sizes for lobsters could change to protect population

Meta to buy VR startup Within after favorable court ruling

Federal patent easements on La Barge Road and Canyon Street, both near the city of Apache Junction, may be abandoned and extinguished, the Pinal County Board of Supervisors decided recently. The …

Flood: Artist finds his passion again, thanks to unlikely muses