BLANTYRE, Malawi (AP) — Malawi’s cholera outbreak has claimed more than 1,000 lives, according to the country’s health minister, who warned that some cultural beliefs and hostility toward … 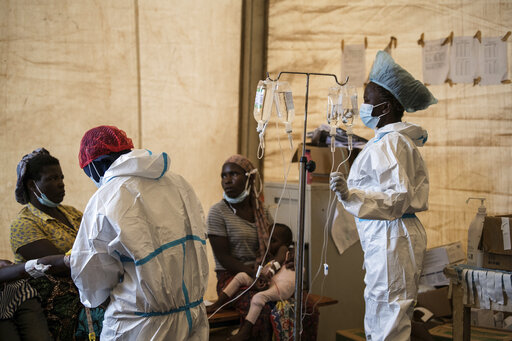 FILE - Health workers treat cholera patients at the Bwaila Hospital in Lilongwe central Malawi on Jan. 11, 2023. Malawi’s cholera outbreak has now claimed more than 1,000 lives by Tuesday, Jan. 25, 2023 according to the country’s health minister, who warned that some cultural beliefs and hostility towards health workers are slowing down response efforts. (AP Photo/Thoko Chikondi, File)
Posted Wednesday, January 25, 2023 9:17 am
By GREGORY GONDWE

BLANTYRE, Malawi (AP) — Malawi’s cholera outbreak has claimed more than 1,000 lives, according to the country’s health minister, who warned that some cultural beliefs and hostility toward health workers were slowing efforts to curb infections.

Cholera had killed 1,002 people as of Tuesday, while 1,115 people were hospitalized from the outbreak that started in March 2022, Minister of Health Khumbize Kandodo Chiponda said. It's the country’s worst outbreak of the waterborne illness in two decades.

Frustration and suspicion over the rising cases resulted in weekend violence. Angry villagers beat up health workers and damaged a facility at the Nandumbo Health Centre in the Southern Region's Balaka district.

Residents accused health workers of denying them an opportunity to conduct dignified burials. They forced some health workers to vacate the facility, stoned a cholera isolation ward and forced the discharge of 22 cholera patients.

Suwedi said residents alleged the workers were using contaminated syringes to inject people. The Balaka district is one of the worst affected areas, recording 46 deaths from 1,450 cases in the outbreak.

Cultural burial rites are also becoming a source of contention, Chiponda, the health minister, said during a daily briefing Tuesday.

“For example, people who are dying of or who have died from cholera may be washed by family members, who then prepare funeral feasts for family and friends held very soon after death. Outbreaks of cholera commonly follow these feasts,” the minister said.

US urges donors to give far more as Somalia faces famine

Challenge for Tunisian democracy: Getting voters to show up

BENGALURU, India (AP) — In May last year Fortum India, a subsidiary of a Finnish solar developer, won the bid for a solar power project in the state of Gujarat. The project was due to be completed …

Authorities ID 3 killed in shooting at home in Los Angeles