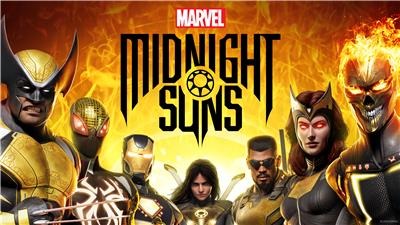 2K and Marvel Entertainment announced that Marvel's Midnight Suns is now available worldwide on Windows PC via Steam and Epic Games Store, PlayStation®5 (PS5™) and Xbox Series X|S. The PlayStation®4 (PS4™), Xbox One and Nintendo Switch™ versions of the game will be available at a later date.

Created by Firaxis Games, the legendary studio behind the critically-acclaimed, world-renowned XCOM and Civilization franchises, Marvel's Midnight Suns combines the rich story, character relationships, customization, and progression of an RPG with the tactical strategy and combat mechanics of a revolutionary new card-based tactics game.

Marvel’s Midnight Suns launched to critical acclaim, with VGC awarding it at 5 out of 5, calling it a “ modern strategy classic;” PC Gamer said it was “completely brilliant” and scored it an 88 out of 100, and Rock Paper Shotgun called it “ one of the best super hero games full stop.”

"The Firaxis team has created a remarkable game in Marvel's Midnight Suns, " said Jay Ong, Executive Vice President at Marvel Games. "Marvel authenticity and love for our characters permeates every battle, decision, and interaction. It’s a dream come true for any Marvel fan who ever fantasized of being able to not just fight alongside legendary Marvel heroes, but to live among them as well."

"We’re thrilled to have Marvel trust us with their universe to create something brand new in Marvel’s Midnight Suns," said David Ismailer, President at 2K. "This game represents some of Firaxis' finest and most ambitious work yet, and we are excited for players around the world to experience Marvel's Midnight Suns."

Set in the darker side of the Marvel Universe, players will forge unbreakable bonds with legendary Marvel Super Heroes and dangerous supernatural warriors in the fight against the world’s greatest threat yet…the demonic forces of Lilith and the elder god Chthon.

“From the explosive action of the battlefield to the unfolding mysteries of the Abbey, we are so excited for players to explore the darker side of the Marvel Universe,” said Bill Rosemann, VP & Creative Director, Marvel Games. “Firaxis dug deep into the Marvel Vault, chose to spotlight characters that they truly love, and poured their hearts into expertly delivering their vision of the rising stars that are the Midnight Suns.”

"I can't overstate how excited we are to finally bring Marvel's Midnight Suns to our fans, whether you are a hardcore Marvel comics reader or a longtime tactics veteran," stated Jake Solomon, Creative Director at Firaxis Games for Marvel's Midnight Suns. "Thank you to everyone who has joined us on our journey to bring this game to life."

Marvel Entertainment, LLC, a wholly-owned subsidiary of The Walt Disney Company, is one of the world's most prominent character-based entertainment companies, built on a proven library of more than 8,000 characters featured in a variety of media for over eighty years. Marvel utilizes its character franchises in entertainment, licensing, publishing, games, and digital media. For more information visit marvel.com. © 2022 MARVEL

Headquartered in New York City, Take-Two Interactive Software, Inc. is a leading developer, publisher, and marketer of interactive entertainment for consumers around the globe. The Company develops and publishes products principally through Rockstar Games, 2K, Private Division, and Zynga. Our products are currently designed for console gaming systems, PC, and Mobile including smartphones and tablets, and are delivered through physical retail, digital download, online platforms, and cloud streaming services. The Company’s common stock is publicly traded on NASDAQ under the symbol TTWO. For more corporate and product information please visit our website at http://www.take2games.com.

All trademarks and copyrights contained herein are the property of their respective holders.

Statements contained herein which are not historical facts are considered forward-looking statements under federal securities laws and may be identified by words such as "anticipates," "believes," "estimates," "expects," "intends," "plans," "potential," "predicts," "projects," "seeks," “should,” "will," or words of similar meaning and include, but are not limited to, statements regarding the outlook for the Company's future business and financial performance. Such forward-looking statements are based on the current beliefs of our management as well as assumptions made by and information currently available to them, which are subject to inherent uncertainties, risks and changes in circumstances that are difficult to predict. Actual outcomes and results may vary materially from these forward-looking statements based on a variety of risks and uncertainties including: risks relating to our combination with Zynga; the uncertainty of the impact of the COVID-19 pandemic and measures taken in response thereto; the effect that measures taken to mitigate the COVID-19 pandemic have on our operations, including our ability to timely deliver our titles and other products, and on the operations of our counterparties, including retailers and distributors; the effects of the COVID-19 pandemic on both consumer demand and the discretionary spending patterns of our customers as the situation with the pandemic continues to evolve; the risks of conducting business internationally; the impact of changes in interest rates by the Federal Reserve and other central banks, including on our short-term investment portfolio; the impact of inflation; volatility in foreign currency exchange rates; our dependence on key management and product development personnel; our dependence on our NBA 2K and Grand Theft Auto products and our ability to develop other hit titles; our ability to leverage opportunities on PlayStation®5 and Xbox Series X|S; the timely release and significant market acceptance of our games; the ability to maintain acceptable pricing levels on our games; and risks associated with international operations.

Other important factors and information are contained in the Company's most recent Annual Report on Form 10-K, including the risks summarized in the section entitled "Risk Factors," the Company’s most recent Quarterly Report on Form 10-Q, and the Company's other periodic filings with the SEC, which can be accessed at www.take2games.com. All forward-looking statements are qualified by these cautionary statements and apply only as of the date they are made. The Company undertakes no obligation to update any forward-looking statement, whether as a result of new information, future events or otherwise.

Durant and the Nets visit the Suns

Most recent
26 athletes who competed into their 40s

Stacker took a dive into greatness by curating a list of 26 ageless athletes who competed well into their 40s, drawing on sites including Stathead and Olympedia.